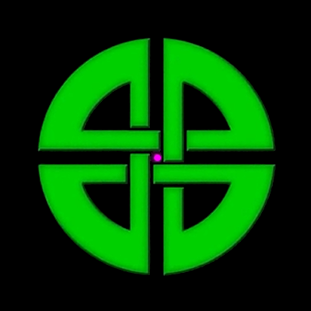 Many people have asked me about the logo of the KelticDead Music initiative. It is a Celtic knot that has a continuous flow around a center. Each "direction" of the path around the center represents forces (or winds) that are aspects of the four "elemental" powers that exist in our universe and shows how these powers affect each of us located in the center of the design.

This continuous knot design is believed to be the oldest Celtic knot known, and some folk estimate that the origins of the design may have come before the Sumerian civilizations. It is also the most powerful Celtic knot design in what it represents for each us as we journey through life ... and beyond.

The four "elements" are generally described as "air," "water (liquids)," "solids," and "fire (energy)." The four directions or "ayrts" (also spelled as "airts") can be described as forward, behind, to our left, and to our right. They can also  represent what is above, below, forward or backward. In other cases the directions represents our future, our past, those things in which we can understand, and those things in which we cannot.

Some have mistakenly described this symbol as a "Celtic cross," and while it is the basis for what the cross stands for in a spiritual sense, it is far more than that. The Celts have long shown this sign by crossing their heart with their fingers to their head, to their core, to the left arm, to then to the right arm. The purple dot in the center of the symbol is the "fifth" element which is our heart.

The green color of the paths represents and honors all those who have died to make our lives possible, and the purple dot is the compliment color of green which is also the color most often used by royalty and for similar reasons. Many in the Celtic cultures refer to this knot as a "navigation" symbol, and I use it in my salute for all my endeavors. This phrase is ...

To the Four Airts to Guide Us; and for the Four Winds to get us there.